To revive the economy govt could boost consumption by 3.3 lakh crore at a cost of just 4750 crore but will it do so?

One of India’s most highly regarded economists has said the economy’s “revival strategy…has to be consumption-led” because “private final consumption expenditure fell more sharply than GDP” in 2020-21. To do this, Soumya Kanti Ghosh, the Group Chief Economic Advisor of the State Bank of India, has suggested two simple and straightforward schemes which, he says, will together boost consumption by 3.3 lakh crore but only cost the government 4750 crores.

The Interviewer’s office in a press release said this and gave details of the interview:–

In a 37 minute interview with Karan Thapar for The  Wire, Dr. Ghosh spelled out his two schemes in detail. The first involves the Mahatma Gandhi National  Rural Employment Guarantee Scheme. The second is a scheme of interest- subsidized loans of up to 50,000 rupees. Both schemes target rural India and are intended to support and revive the rural economy in the belief that, in turn, its revival will provide a lifeline for the national economy. Given the present slow revival of the urban economy, Dr. Ghosh says steps to revitalize the rural economy can lift the national economy. Also if we end up with a poor or uncertain and patchy monsoon his suggested measures will tackle the distress a poor or weak monsoon is likely to cause.

Calculating that a 100 days work at Rs 200 per day for 9.35 crore NREGA cardholders, all of whom already have bank accounts, will cost 1.87 lakh crore, Dr. Ghosh says the government should advance 50,000 crores which will be repaid by the NREGA work that is done when Covid conditions permit large groups of people to work on NREGA sites. Therefore this is an advance, not a loan. Second, if the government covers the interest cost of the banks at 8% it will only have to pay 4000 crores. However at a  marginal propensity to consume of 0.7 this will result in a boost to consumption of 1.66 trillion.

Dr. Ghosh’s second proposal involves loans of up to 50,000 given on the premise that interest-servicing of the loans will be sufficient to keep the loans current and functioning. Now if the government pays for a 3 percent interest subsidy the outlay for the first half of 2021-22 will be just 750 crores. Once again, Dr Ghosh estimates that the boost to consumption will be of the order of 1.6 trillion.

This means that the two schemes he has suggested to boost consumption will together only cost 4750 crores whilst lifting consumption by 3.3 lakh crore.

Dr Ghosh has told The Wire his two suggestions will not have any meaningful impact on the 6.8 per cent fiscal deficit target set by the budget. Equally importantly, he believes the fiscal situation “isn’t as bad as is generally thought”. This is because oil excise tax collections are likely to yield 1.32 lakh crore more than estimated in the budget whilst GST is on target to yield an additional 60,000. Also, he says,  judging by the first two months, tax revenue, both direct and indirect, could end up the highest in two decades.

In The Wire interview, Dr. Ghosh also spelled out a novel, simple and painless way of promoting and encouraging health insurance by using the interest earned in people’s savings accounts as the health insurance premium.

Dr. Ghosh said there are 130 crore savings accounts and the interest across all such accounts is 1.6 lakh crore. The average interest paid per account is 1215. Now if an average premium of 1200 is paid it can deliver health cover of 50,000.

The key – if not the genius – behind this idea is that most people don’t think about and therefore care about the interest earned by their savings account. Therefore if this interest is used to pay the premium on their health insurance it would feel like cost-free insurance ie it’s not coming out of their pocket but from an interest payment, they don’t particularly care about.

However, there is a lot more in the interview than has been covered by this précis. For instance, Dr. Ghosh explains why his proposals will not fuel inflation and how the circumstances of today are different to those of 2008-9 when a revival package lead to double-digit inflation. Dr. Ghosh also explains why he believes his scheme of loans up to 50,000 is preferable to a similar sort of scheme announced in the government’s June relief package, which later in an article for The Times of India the Chief Economic Advisor seemed to suggest people should avail of and default upon. Please see the full interview to better appreciate Dr. Ghosh’s ideas and the reasoning behind them.

Here is the link: https://www.youtube.com/watch?v=xPy7VisjXoQ/ 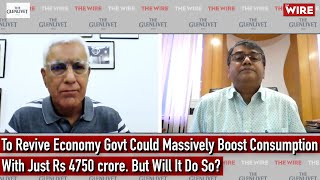 THE IDEA OF INDIA ; A revisit to the Gandhian approach warranted