Even as the Supreme Court has put a stay on the implementation of the three farm laws until further orders and constituted a committee of agricultural experts to facilitate talks between the Centre and farmers’ unions to resolve the impasse, Farmers have announced that they are agitating for the repeal of laws and MSP guarantee. The stir will continue till these demands are met.

The bench headed by Chief Justice of India, S. A. Bobde, and comprising Justices A. S. Bopanna and V. Ramasubramanian, said those genuinely interested in finding a solution would appear before the committee. The bench was hearing a batch of petitions regarding the Constitutional validity of three farm laws passed by Parliament and a plea to disperse the protesting farmers. It formed a committee of experts to discuss the issue with farmers and submit a report to the court.

“The demand for farmers is to repeal the law and make the minimum support price a law. The movement will continue till this demand is met. The United Front will announce further strategy tomorrow after examining the order of the Hon’ble Supreme Court”, Mr. Rakesh Singh Tikait, BKU Leader and spokesperson of agitating farmers. The committee is the judicial process in this case.

The Apex Court said it was trying to solve the problem in the best way and had the power to suspend the laws.  The bench said it is concerned about the validity of the laws and also about protecting the life and property of citizens affected by the agitation.

The apex court also issued notice to farmers’ unions on a Delhi Police plea to stop a tractor rally during the January 26 Republic Day parade.

Farmers continued the stir at the borders of the national capital on the 47th day today.

Kisan Ekta Morcha
@Kisanektamorcha
The farmers say that ‘Stay on implementation’ is just a temporary solution. And that the govt. has to repeal the farm laws to stop the ongoing fierce protest. #FarmersAppealLawsRepeal 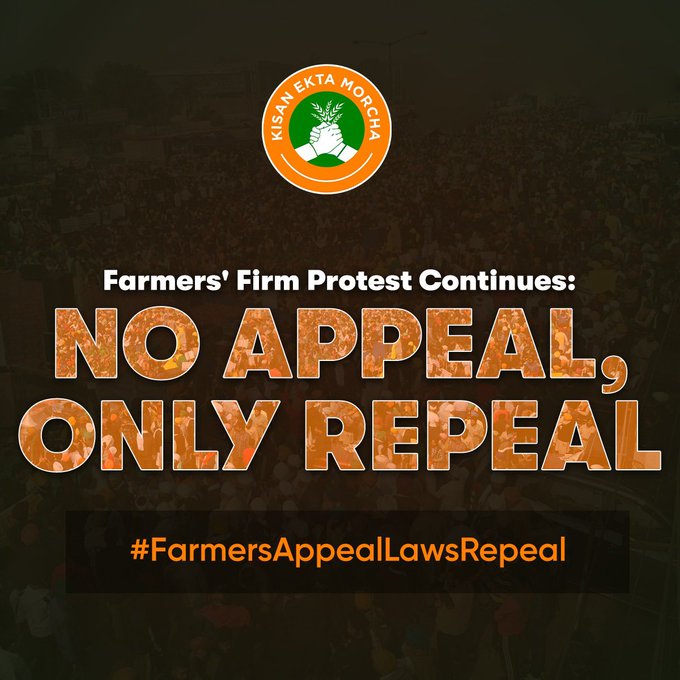 (NOTE: We seek your support—At a time when the news is under threat, we have opted for a different approach with hopes of your support)

Football ISL: Chennaiyin , Odisha to battle it out for full points  in round two