Rampaging Pandemic: Security threat concerns post the Capitol building violence and rampaging pandemic have virtually taken off the sheen of the 59th US Presidential inauguration on Jan 20 amid the latest forecast: 16,200 to 29,600 new deaths will likely be reported there in the week ending February 6, 2021.

The virus has so far infected 94.59 million and killed over two million people globally.

India has so far vaccinated a total of 2,24,301 beneficiaries till today as per the provisional report. The drive had started yesterday.

Most of the AEFIs reported so far are minor like Fever, Headache, Nausea, etc.

This week’s US CDC’s national ensemble forecast predicts that 16,200 to 29,600 new deaths will likely be reported in the week ending February 6, 2021. The national ensemble predicts that a total of 440,000 to 477,000 COVID-19 deaths will be reported by this date. This week, CDC received forecasts of COVID-19 deaths over the next 4 weeks from 39 modeling groups that were included in the ensemble forecasts. Of the 39 groups, 35 provided forecasts for both new and total deaths, two groups forecasted total deaths only, and two forecasted new deaths only.

The New York National Guard is back at New York’s Jacob Javits Convention Center, helping to turn what was a COVID-19 hospital in 2020 into a mass vaccination site in 2021.

The situation in the UK is equally worrisome. The first case of COVID-19 in the United Kingdom was reported 351 days ago on 1/31/2020. Yesterday, the country reported 41,428 new confirmed cases and 1,299 death. More restrictions come into force tomorrow.

The US COVID Tracking Project@COVID19Tracking has tweeted:
Our daily update is published. States reported 2M tests, 215k cases, 126,139 people currently hospitalized with COVID-19, and 3,695 deaths. The 7-day average for tests is at a record high. 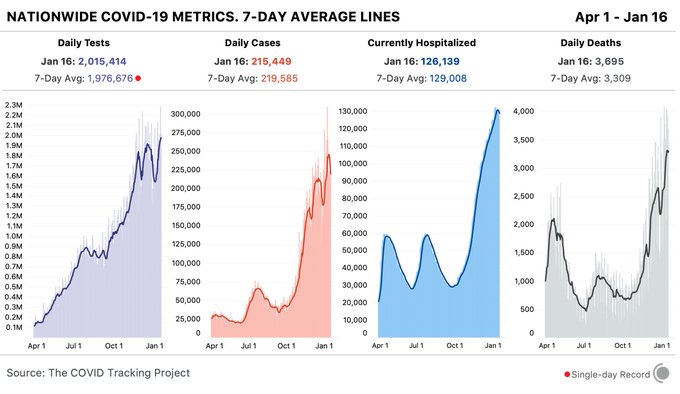 India has vaccinated the highest number of persons on Day1 under its COVID19 vaccination program, the world’s largest such exercise. A total of 2,24,301 beneficiaries has been vaccinated till today as per the provisional report.

The second day of the massive countrywide COVID-19 vaccination program was also conducted successfully. A total of 553 sessions were held in six States (today being Sunday). 17,072 beneficiaries were vaccinated on Day2, as per the provisional reports.

States/UTs have been advised to plan COVID19 vaccination sessions four days a week to minimize disruption of the Routine Health Services. Some States have already publicized their weekly vaccination days. In the last 24 hours, 15,144 daily Coronavirus cases have been recorded. The Active Caseload of the country has fallen to 2,08,826. The daily new cases have been below 20,000 for the past 10 days.

Six States  & UTs have reported 66.30% of the 181 case fatalities in the past 24 hours. Maharashtra has reported 52 deaths. Kerala saw a fatality count of 27 while West Bengal reported 15 new deaths.

Most of the AEFIs reported so far are minor like Fever, Headache, Nausea, etc.

An Adverse Event Following Immunization (AEFI) is an unexpected medical occurrence that follows immunization which may not be related to the vaccine or vaccination process. Protocols are in place for reporting, immediate case management at vaccination session site, transportation and hospitalization, and further care of such cases. Protocols are also in place for systematic investigation and causality assessment of serious AEFIs.

A meeting was held with all States/UTs today for a review of progress, identification of bottle-necks and to plan corrective actions as the vaccination program moves ahead.

Caption: U.S. Army Spc. Anthony Randazzo, wheeled vehicle mechanic assigned to Company H 427 Battalion Support Brigade, waits for his cue during a mission rehearsal for mass COVID-19 vaccinations in support of the New York State Department of Health at the Javits Convention Center in Manhattan, New York, January 10, 2021. The National Guard has more than 350 Guardsmen and women deployed to the vaccination site to support access control, registration, and command post staffing for the site. The New York State Department of Health conducts vaccination efforts for essential workers and members of the community over age 75 beginning January 13, 2021. Eligible members of the public can register for a vaccine appointment through the Department of Health website. (U.S. Army National Guard photo by Sgt. Sebastian Rothwyn)

One positive COVID-19 test has been returned from a passenger on a charter flight into Melbourne from Abu Dhabi in the past 24 hours.

There were 64 people on the flight, including 23 players.

All passengers from the flight are already in quarantine hotels and the positive case, who is not a player and had tested negative before the flight, has been transferred to a health hotel.

The 23 players on the flight will not be able to leave their hotel room for 14 days and until they are medically cleared. They will not be eligible to practice.

Two positive COVID-19 tests were returned from one of the charter flights into Melbourne in the past 24 hours.

There were 79 people on the flight, including 67 passengers, of which 24 are players.

The two positive tests have been returned by a member of the flight crew and a passenger who is not a player, who returned a negative test within 72 hours prior to boarding the flight.

All passengers from the flight are already in quarantine hotels and the two positive cases transferred to a health hotel.

The 24 players on the flight will not be able to leave their hotel rooms for 14 days and until they are medically cleared. They will not be eligible to practise.

“We are communicating with everyone on this flight, and particularly the playing group whose conditions have now changed, to ensure their needs are being catered to as much as possible, and that they are fully appraised of the situation.

“Our thoughts are with the two people who tested positive on the flight and we wish them well for their recovery.”