Punjab Chief Minister Amarinder Singh today sprang a surprise by handpicking ace poll strategist Prashant Kishor as his ” Principal Advisor” in the rank of a cabinet minister with a token honorarium of Rs one per month.

The appointment has come a year ahead of state assembly polls which are scheduled to be held next year-2022. The ruling Congress is upbeat in the sensitive border state with a thumping success in the recently held municipal corporations by making inroads in those pockets like Bhatinda where it was out he recking for last several years.

Capt.Amarinder Singh@capt_amarinder: Happy to share that@PrashantKishor
has joined me as my Principal Advisor. Look forward to working together for the betterment of the people of Punjab!3:24 PM · Mar 1, 2021·Twitter for iPhone
Mr. Kishor told NDTV that the offer had been on the table for the past year and that Amarinder Singh is “like family”. “I can’t say ‘no’ to him…,” Mr. Kishor said.

#PunjabCabinet clears the appointment of Shri

as Principal Advisor to the Chief Minister

Singh in the rank and status of a Cabinet Minister. 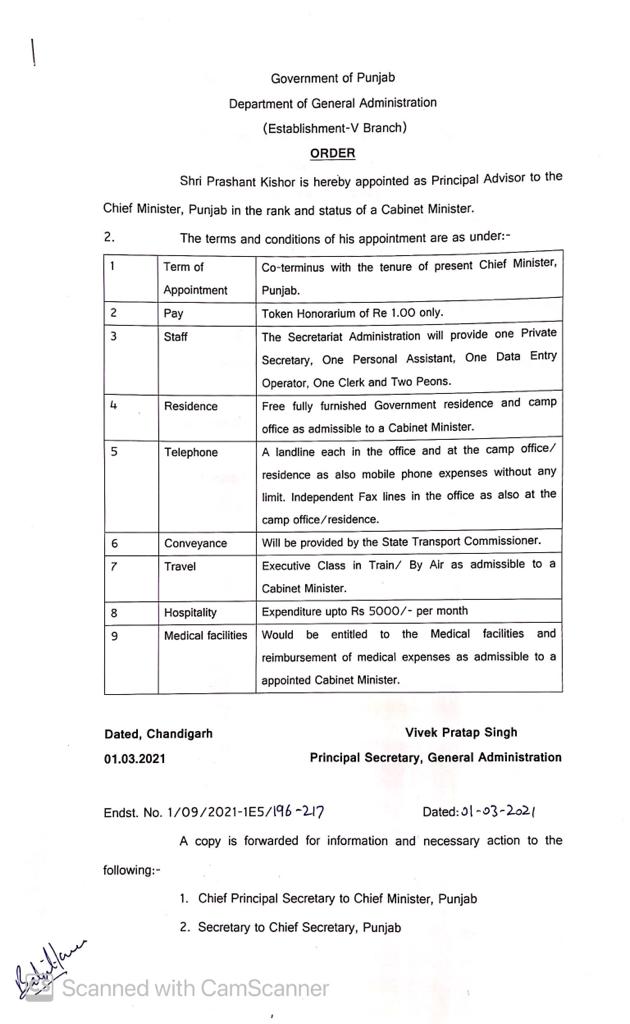 Two days back, his tweet: “On 2nd May, hold me to my last tweet” on Crucial West Bengal polls had gone viral.

Indian Political Action Committee (I-PAC) is the platform of choice for students and young professionals to participate in and make a meaningful contribution to political affairs and governance of the country, without necessarily being part of a political party.

Started as Citizens for Accountable Governance (CAG) in 2013, I-PAC has brought some of the best minds from diverse academic and professional backgrounds together and provided them with a unique opportunity to become a part of the election process and influence policymaking in India.

I-PAC works with visionary leaders with a proven track record. In the process, the group helps them set a citizen-centric agenda and partners with them to conceptualize & implement the most effective methods of taking it to the public and gathering mass support.