Amid growing controversy over spyware Pegasus, Minister of Electronics & Information Technology Ashwini Vaishnav made a statement on  “Alleged use of spyware Pegasus to compromise phone data of some persons on the opening day of the Monsoon Session of the Lok Sabha today and said.” it appeared to be an attempt to malign the Indian democracy and its well-established institutions”.

He observed that the press reports have appeared a day before the Monsoon session of Parliament and This cannot be a coincidence.

He was making a detailed statement on the reported use of spyware Pegasus to compromise the phone data of some persons. ‘When we look at this issue through the prism of logic, it clearly emerges that there is no substance behind this sensationalism”, He said.

He said, “A highly sensational story was published by a web portal yesterday night. Many over-the-top allegations have been made around this story.”

“In the past, similar claims were made regarding the use of Pegasus on WhatsApp. Those reports had no factual basis and were categorically denied by all parties, including in the Supreme Court. The press reports of 18th July 2021 also appear to be an attempt to malign the Indian democracy and its well-established institutions.

He said, “We cannot fault those who haven’t read the news story in detail. And I request all Members of the House to examine the issues on facts and logic.

The basis of this report is that there is a consortium that has got access to a leaked database of 50,000 phone numbers. The allegation is that individuals linked to these phone numbers were being spied upon. However, the report says that:

The presence of a phone number in the data does not reveal whether a device was infected with Pegasus or subject to an attempted hack.

Without subjecting a phone to this technical analysis, it is not possible to conclusively state whether it witnessed an attack attempt or was successfully compromised.

Therefore, the report itself clarifies that the presence of a number does not amount to snooping.

he said, let us examine what NSO, the company which owns the technology has said. It said:

NSO Group believes that claims that you have been provided with, are based on a misleading interpretation of leaked data from basic information, such as HLR Lookup services, which have no bearing on the list of the customers’ targets of Pegasus or any other NSO products.

Such services are openly available to anyone, anywhere, and anytime, and are commonly used by governmental agencies as well as by private companies worldwide. It is also beyond dispute that the data has nothing to do with surveillance or with NSO, so there can be no factual basis to suggest that a user of the data somehow equates to surveillance.

It is evident that NSO has also clearly rubbished the claims in the report.

Let us look at India’s established protocol when it comes to surveillance. I’m sure my colleagues in the opposition who have been in Government for years would be well aware of these protocols. Since they have governed the country, they would also be aware that any form of illegal surveillance is not possible with the checks and balances in our laws and our robust institutions.

“In India, there is a well-established procedure through which lawful interception of electronic communication is carried out for the purpose of national security, particularly on the occurrence of any public emergency or in the interest of public safety, by agencies at the Centre and States. The requests for this lawful interception of electronic communication are made as per relevant rules under the provisions of section 5(2) of the Indian Telegraph Act,1885 and section 69 of the Information technology, 2000.

The procedure, therefore, ensures that any interception or monitoring of any information is done as per the due process of law. The framework and institutions have withstood the test of time.

Congress tweeted: India demands a thorough investigation into the revelations by the #PegasusProject and nothing short of strong & stringent actions against those responsible is acceptable. #BharatiyaJasoosParty 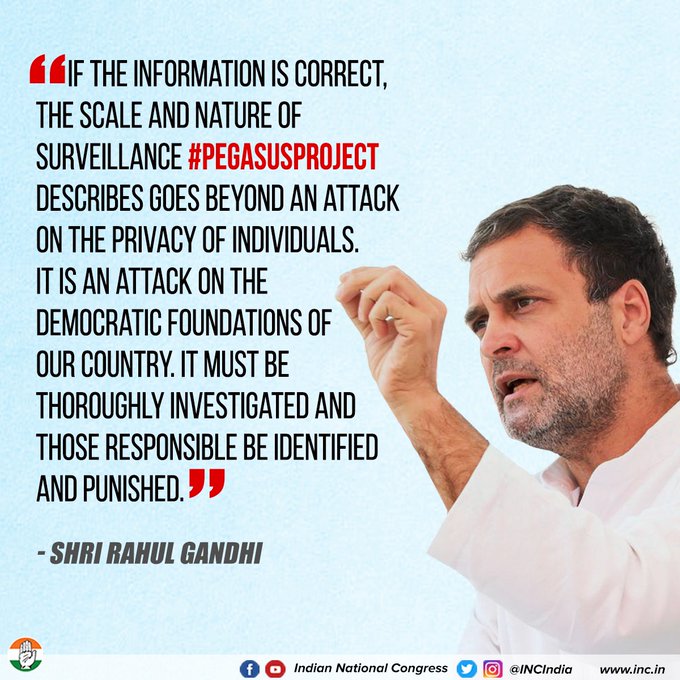 The Washington Post had reported: Military-grade spyware licensed by an Israeli firm to governments for tracking terrorists and criminals was used in attempted and successful hacks of 37 smartphones belonging to journalists, human rights activists, and others, according to an investigation by The Washington Post and 16 media partners.

UP braces up for possible 3rd wave of pandemic

BJP has much hope on Amit Shah in UP elections

OBC resignations in UP a challenge to PM Modi

Why was Covovax given a pass?

Why was Covovax given a pass?
2 weeks ago

Why was Covovax given a pass?

Press Release and Video: Omicron is intrinsically less virulent than earlier variants but the next one is likely to be more severe – Omicron could be an evolutionary mistake: Professor of Clinical Microbiology, Cambridge University, Ravindra Gupta.
2 weeks ago

Press Release and Video: Omicron is intrinsically less virulent than earlier variants but the next one is likely to be more severe – Omicron could be an evolutionary mistake: Professor of Clinical Microbiology, Cambridge University, Ravindra Gupta.

Vaccines, boosters and some hard talk
3 weeks ago

Vaccines, boosters and some hard talk