(Meanwhile, NCP leader tweeted: Sharad Pawar:@PawarSpeaks: A meeting of the National Executive Committee of our Nationalist Congress Party was held in New Delhi today. In this meeting, I had a detailed discussion with my committee members on our future policies, our role in the next Lok Sabha elections, and current national issues. 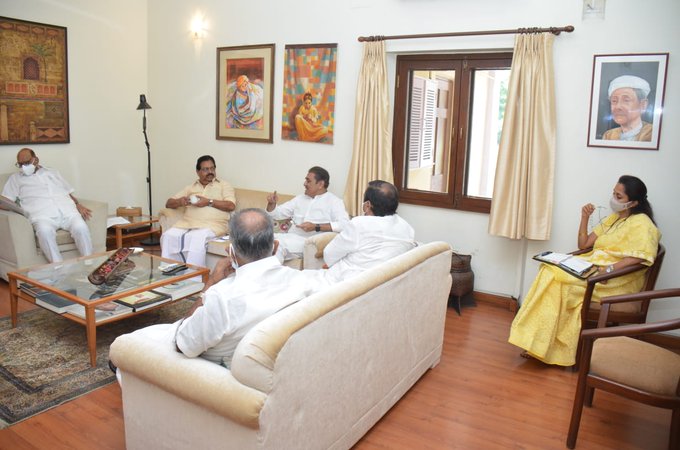 Prashant Kishor who had met  NCP chief Sharad Pawar yesterday has put paid the speculations that the meeting was going to explore third for the fourth front as being speculated widely in the media. He has aired his reservations during a talk with NDTV. He has ruled out any association with an opposition front to take on the BJP in the next general election.  “I don’t believe a Third or Fourth Front could emerge as a successful challenge to the current dispensation,” he told NDTV..Mr. Kishor believes that the ‘tried and tested’ Third Front model is archaic, and not suited to the current political dynamic.

Several prominent political leaders and eminent persons from different sections of society met and held threadbare discussions on the issues that are burning in their perceptions and warranted urgent attention.

Rashtra Manch will be a ‘Manch” that will include everyone who has a vision for the country’s development & future, whether it’s a political party, social organization, or a person. Rashtra Manch will also include those in India & abroad who think about the country: Ghanshyam Tiwari, SP told reporters after the meeting.

We had a meeting of the Rashtra Manch and it lasted for 2.5 hours, Mr. Yashwant Sinha of Trinamool Congress has said.

The meeting came close on the heels of protracted discussions between Pawar and poll strategist Prashant Kishore. The meeting was  held amid swirling political developments ahead of assembly polls in five states -including UP, in a few months and opposition parties victory in the state of West Bengal, Tamil Nadu, and Kerala,

This meeting was held ahead of the Jun 24 meeting called by the Prime to discuss the situation in Kashmir. Fourteen political leaders including Farooq Abdullah’s  National Conference and Mehbooba Mufti’s PDP from different parties have been invited. The meeting is called by the Prime Minister to take the political process further in the union territory.

Karnataka Chief Minister B.S. Yediyurappa tweet asking workers not to indulge in any protests stokes speculations about his ouster

Navjot Singh Sidhu as Punjab PCC chief: A dicey choice for the Congress

As the Tokyo Games begin, the stakes could not be higher for Japan — and the Olympics themselves
11 hours ago

US Clamps sanctions on Cuba Defence Minister & Interior Ministry division for repessing peaceful protests;” This is just the beginning”:Biden
23 hours ago