Dr. Harshvardhan said: “In recent days, I have seen with growing dismay a number of irresponsible statements from some State government functionaries in the context of the Covid-19 pandemic. As these statements have the potential to mislead the public and spread panic, it has become necessary to put the record straight.

At a time when the country is witnessing a fresh wave of rising COVID-19 infections, I am alarmed to note the fact that many State governments have failed to take appropriate response measures and apply the lessons that the nation has learned over the past year of handling this pandemic.

Most concerning of all are the statements being made by a section of political leaders asking to open up vaccination to everyone above the age of 18 or to drastically lower the minimum age criteria for vaccination eligibility. The Government of India has been frequently and transparently updating all the State governments about the demand-supply dynamics and the resultant vaccination strategy that has been adopted. In fact, the vaccination strategy has been drawn up after extensive deliberations and consultations in partnership with all State governments. The same has also been a matter of public record for several months now.

Nonetheless, it bears repeating that the primary aim of vaccination is to reduce mortality among the most vulnerable people and enable society to beat the pandemic. Accordingly, the world’s largest vaccination drive was launched in India with the first recipients being our healthcare personnel and front-line workers. Once this had progressed to a certain level, vaccination was opened up to further categories and is currently open to everyone above the age of 45 years. It is also to be noted that vaccination is completely free of cost for anyone getting vaccinated in government medical facilities.

So long as the supply of vaccines remains limited, there is no option but to prioritize. This is also an established practice around the world and is well known to all State governments.

When states ask to open up vaccine supplies to everyone over 18, we must presume that they have done saturation coverage of healthcare workers, frontline workers, and senior citizens. But the facts are altogether different.

Maharashtra has vaccinated just only 86% of health workers with the first dose. The equivalent numbers for Delhi and Punjab are 72% and 64%. On the other hand, 10 Indian states/UTs have done more than 90%.

Maharashtra has vaccinated just 41% of healthcare workers with a second dose. Equivalent numbers for Delhi and Punjab are 41% and 27%. There are 12 Indian states/UTs that have done more than 60%.

Among frontline workers, Maharashtra has vaccinated only 73% with the first dose. Equivalent numbers for Delhi and Punjab are 71% and 65%. There are 5 Indian states/UTs that have already done more than 85%.

Vaccination of frontline workers with second does for Maharashtra is at  41% For Delhi and Punjab, these numbers are 22% and 20%. There are 6 Indian states/UTs that have done more than 45%.

Doesn’t it seem evident that these states are trying to divert attention from their poor vaccination efforts by just continuously shifting the goalposts? Politicizing such a public health issue is a damning indictment of certain political leaders who should know better.

In particular, I have seen statements made by public representatives in Maharashtra about the shortage of vaccines. This is nothing but an attempt to divert attention from the Maharashtra government’s repeated failures to control the spread of pandemics. The inability of the Maharashtra government to act responsibly is beyond comprehension. To spread panic among the people is to compound the folly further. Vaccine supplies are being monitored on a real-time basis, and State governments are being apprised regularly about it. Allegations of vaccine shortage are utterly baseless.

Throughout the last year, as the Health Minister of India, I have been a witness to the misgovernance and utter casual approach of the Maharashtra Government in battling the virus. The lackadaisical attitude of the state government has singularly bogged down the entire country’s efforts to fight the virus.

We, in the central government, have regularly counseled the Maharashtra state government, made available all resources, and sent central teams for help. However, the lack of efforts on the part of the state government is now clearly visible and comes to haunt us all.

Today, Maharashtra not only has the highest cases and deaths in the country but also has one of the highest test positivity rates in the world! Their testing is not up to the mark and their contact tracing leaves a lot to be desired.

The performance of the Maharashtra government in terms of vaccinating healthcare workers and frontline workers is also not great. It is shocking to see how the state Government is putting Maharashtrians in danger by letting people escape institutional quarantine mandate for the sake of their personal Vasuli. Overall, as the state has lurched from one crisis to another, it seems as if the state leadership is happily sleeping on the wheels.

Maharashtra Government needs to do a lot more to control the pandemic and the Central Government will help them in all possible ways. But focusing all their energies on playing politics and spreading lies to create a panic is not going to help the people of Maharashtra.

Similarly, we have seen regular comments by leaders from Chhattisgarh that are intended to spread misinformation and panic on vaccination. I would like to humbly state that it would be better if the state government focusses its energies on ramping up their health infrastructure rather than on petty politicking.

Chhattisgarh has seen a disproportionately higher number of deaths in the last 2-3 weeks. Their testing remains heavily dependent on rapid antigen tests which is not a wise strategy.

The State Government in fact refused to use Covaxin despite it being given Emergency Use Authorization (EUA) by the Drug Controller of India. Not only this, by its actions, the leaders of the state government have the dubious distinction of being perhaps the only government in the world to have incited vaccine hesitancy.

Many other states also need to bring their healthcare systems up to the mark. For example, the quality of testing needs to improve in Karnataka, Rajasthan, and Gujarat. In Punjab, a high Case Fatality Rate needs to be improved by early identification of those needing hospitalization. Mask-wearing and social distancing compliance are slack in a large number of States. There is a lot that needs to be done, and we must do it all with speed and at scale.

I am constrained to speak out now because my silence should not be misconstrued for weakness. Playing politics is easy, but improving governance and health infrastructure is the real test.

I would again like to stress to all States that the Central Government is doing everything it can to help them. India has the unique advantage of having talented scientists and doctors and hard-working healthcare workers. All of us need to work hard and work together to defeat this pandemic. Let us not squander the gains we have made and focus on our solemn public duty. We owe the citizens of India nothing less. 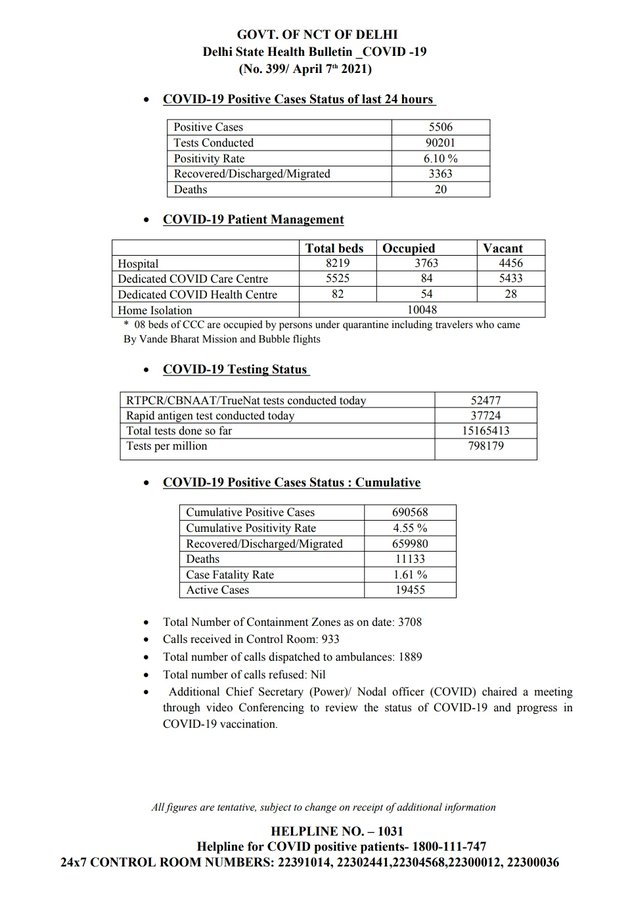