Between one quarter and one half. That’s how much carbon dioxide (CO2) and other greenhouse gases must fall over the next decade to keep alive the goal of restricting global warming to below 2oC. The fastest and most practical way to achieve this is by creating an international carbon price floor arrangement.

This matters to the IMF because climate change presents huge risks to the functioning of the world’s economies. The right climate policies can address these risks and also bring tremendous opportunities for transformative investments, economic growth, and green jobs—so much so that our Board recently approved proposals to include climate change in our regular country economic surveillance and our financial stability assessment program.

At the heart of our policy discussions with member countries is carbon pricing—now widely accepted as the most important policy tool to achieve the drastic cuts to emissions we need. By making polluting energy sources more expensive than clean sources, carbon pricing provides incentives to improve energy efficiency and to re-direct innovation efforts towards green technologies. Carbon pricing needs to be supported by a broader package of measures to enhance its effectiveness and acceptability including public investment in clean technology networks (like grid upgrades to accommodate renewables) and measures to assist vulnerable households, workers, and regions. Nonetheless, at the global level, additional measures equivalent to a carbon price of $75 per ton or more are required by 2030.

Ahead of the United Nations’ 26th annual climate change conference (COP26) in November—the most important climate conference since Paris 2015—we see promising signs of growing climate ambition. Many countries have started new climate objectives—60 countries have already pledged to be emissions-neutral by midcentury and some, including the European Union and the United States, have offered stronger near-term pledges. Importantly, carbon pricing schemes are proliferating—more than 60 have been implemented globally, including key initiatives this year in China and Germany.

Yet stronger and more coordinated action in the decade ahead is critical.

While some countries are moving ahead aggressively, ambition varies country-by-country such that four-fifths of global emissions remain unpriced and the global average emissions price is only $3 per ton. As a knock-on effect, some countries and regions with high or rising carbon prices are considering placing charges on the carbon content of imports from places without similar schemes. From a global climate perspective, however, such border carbon adjustments are insufficient instruments as carbon embodied in trade flows is typically less than 10 percent of countries’ total emissions.

In part, the slower progress reflects how hard it can be for countries to unilaterally scale up mitigation policies to meet their Paris Agreement commitments—not least because of concerns about how it may affect their competitiveness and worries that others may not match their policy actions. The near-universal country participation in the Paris Agreement, so critical for its legitimacy, does not make for easy negotiation.

So how do we get carbon pricing to where it needs to be within ten years? A new paper from IMF staff, still under discussion with the IMF Board and membership, proposes the creation of an international carbon price floor arrangement that complements the Paris Agreement and is:

1. Launched by the largest emitters. The chart shows, that China, India, the US and the EU will account for nearly two-thirds of projected global CO2 emissions in 2030 (if no new mitigation actions are taken). Including the full G20 takes this to 85 percent. Once launched, the scheme could gradually expand to encompass other countries. 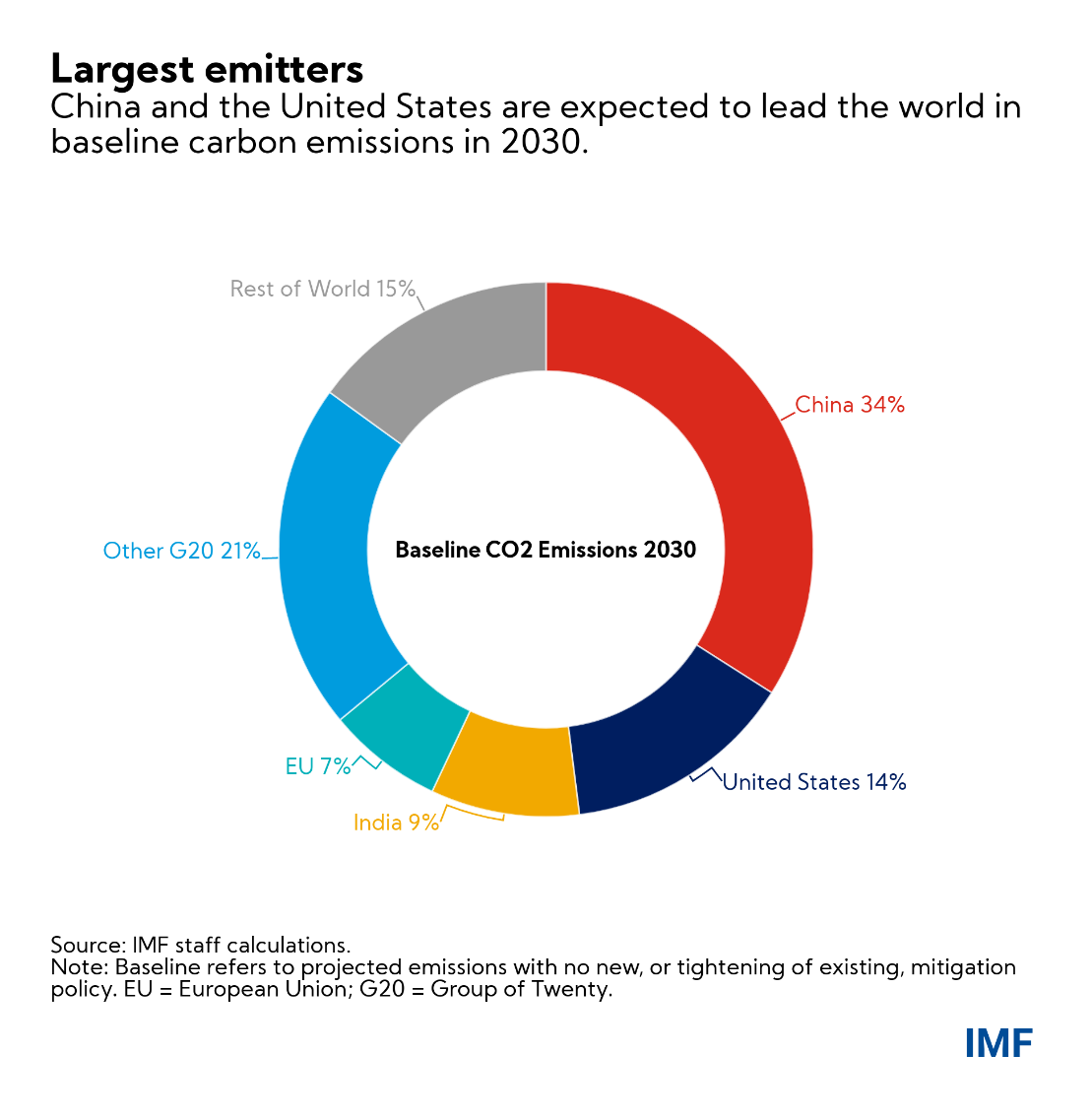 2. Anchored on a minimum carbon price. This is an efficient, concrete, and easily understood policy instrument. Simultaneous action among large emitters to scale up carbon pricing would deliver collective action against climate change while decisively addressing competitiveness concerns. The focus on a minimum carbon price parallels the current discussion on a minimum for the tax rate in international corporate taxation. More broadly, international harmonization through tax rate floors has a long tradition in Europe.

3. Designed pragmatically. The arrangement needs to be equitable, flexible and account for the differentiated responsibilities of countries given, among other factors, historical emissions and development levels. One way to do this is to have, say, two or three different price levels in the agreement that vary according to accepted measures of a country’s development. The arrangement could also accommodate countries where carbon pricing is not currently feasible for domestic political reasons, so long as they achieve equivalent emissions reductions through other policy instruments.

An illustrative example shows that reinforcing Paris Agreement pledges with a three-tier price floor among just six participants (Canada, China, European Union, India, United Kingdom, United States) with prices of $75, $50, and $25 for advanced, high, and low-income emerging markets, respectively and in addition to current policies, could help achieve a 23 percent reduction in global emissions below baseline by 2030. This is enough to bring emissions in line with keeping global warming below 2°C.

The application of carbon pricing across Canadian provinces gives a good prototype for how a price floor could translate to the international level. The federal government requires provinces and territories to implement a minimum carbon price rising progressively from CAN$10 per ton in 2018 to CAN$50 in 2022 and CAN$170 in 2030. Jurisdictions are free to meet this requirement through carbon taxes or emissions trading systems.

At the international level, a well-designed carbon price floor agreement would yield benefits to individual countries as well as to the collective. All participants would be better off from stabilizing the global climate system, and countries would enjoy domestic environmental benefits from curbing fossil fuel combustion—most importantly, fewer deaths from local air pollution.

There is no time to waste in putting in place such an arrangement. Imagine us in 2030. Let us make sure that we will not look back at 2021 just to regret the missed opportunity for effective action. Let us instead look back with pride at global progress towards keeping global warming below the 2oC threshold. We need coordinated action now—and it should be centered on an international carbon price floor.

Vitor Gaspar is the Director of the IMF’s Fiscal Affairs Department.

Do we provide a link to another option to back up the initiative —https://mail.google.com/mail/u/

Time running out for countries on climate crisis front line