18000 earthquakes hit Iceland since eruption a week ago

Icelandic Meteorological Office – IMO@Vedurstofan has tweeted today:1/2 Yesterday, about 2500 earthquakes measured, since midnight almost 800 earthquakes measured. In total, there have been over 18000 earthquakes since the eruption began about a week ago. Most activities limited to Fagradalsfjall, a slight movement to the SW compared to activity yesterday.12:19 PM · Mar 4, 2021·Twitter Web App/7/Retweets/19/Likes
Another tweet said 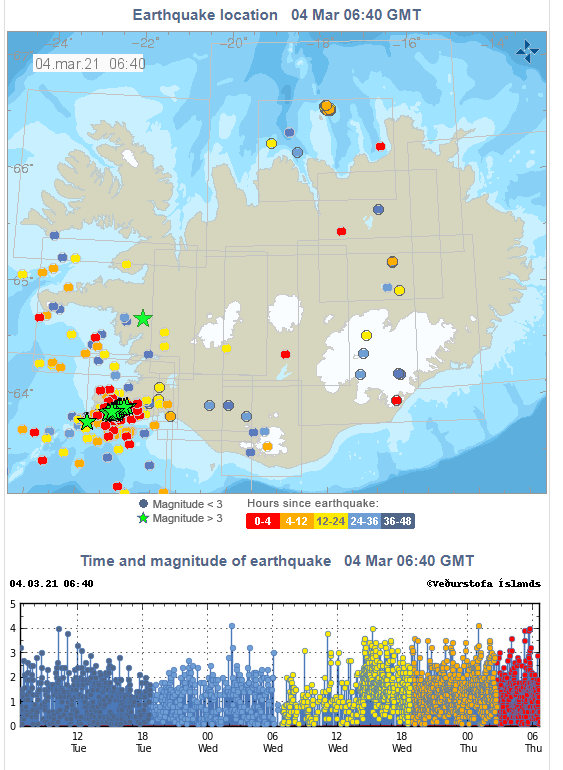 March 3,2021:At 14:20 today a sudden increase in seismic tremors was detected throughout most of Iceland’s national seismic network. At the time of writing, the tremor continues although its intensity has reduced slightly. The tremor, which comprises many small, overlapping earthquakes, is sourced from a region 2 km southwest of Keilir on the Reykjanes Peninsula. Similar bursts of tremors have been observed ahead of previous volcanic eruptions in Iceland. Magma movements are a likely cause for the ongoing signal, and it is possible that an effusive (lava-producing) eruption could occur close to Keilir. However, at the time of writing, no volcanic eruption is occurring on the Reykjanes Peninsula.

Analysis of various sensor and satellite-based monitoring data continues at pace, with further spaceborne radar images becoming available late this evening. As a precaution for domestic and international air travel, the volcanic aviation colour code for the Reykjanes Peninsula has been elevated from yellow (elevated unrest) to orange (heightened unrest). The orange alert represents the third-highest level, with red reserved for an imminent or ongoing volcanic eruption. 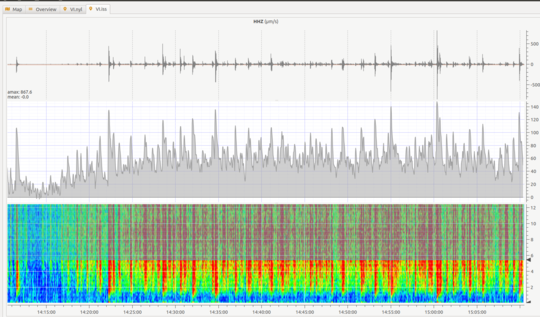 On 1 March, the Scientific Advisory Board of the Icelandic Civil Protection met to discuss the latest monitoring results from the seismic unrest on the Reykjanes Peninsula. In particular, the latest satellite-based radar (InSAR) image was reviewed. The displacements in the InSAR scene show more ground deformation than can be explained by the earthquake activity alone. The most likely explanation is that magma intrusions are occurring close to Fagradalsfjall, where the earthquake activity has persisted in recent days. The latest satellite results will be processed with additional geodetic modeling to better understand the causes of the ground deformation.

Given the new results discussed by the Scientific Advisory Board, it is important to consider scenarios in the development of the seismicity that could involve volcanic activity close to Fagradalsfjall.

The evolution of the seismicity continues to be monitored day and night, and in the event of an eruption, various contingency plans are in place.

On February 24th, 2021, two earthquakes above magnitude M5 were recorded. The larger one, M5.7,  was at 10:05 and at 10:30 an M5.0 was measured. Later that day at 12:37 a M4.8 was recorded. Since the beginning of this unrest 16 earthquakes above  M4 have been recorded and 90 earthquakes above M3. They have been felt widely in the SW part of the country and the larges once in the NW part as far as Ísafjörður. Note that all reviewed earthquakes have occurred on the Reykjanes Peninsula, roughly between Kleifarvatn and Svartsengi. Be aware that our web shows in accurate locations from the automatic system.

Today five earthquakes above M4 have been measured in the northern part of Fagradalsfjall, M4,4 at 12:06, M4,0 at 12:24, M4,1 at 13:51 og M4,2 at 15:10. All those are in a similar location as the M5,7 earthquake. Our interpretation is that these are triggered earthquakes caused by the intense activity and deformation that has occurred in the area. The swarm is still ongoing and roughly 5000 earthquakes have been detected with the automatic system since the beginning of the swarm.

The satellite image below displays a Sentinel-1 interferogram spanning the period 19-25th February. This shows ground deformation associated with the recent earthquake activity on the Reykjanes Peninsula and indicates this was related to a combination of movement on north-south trending faults and left-lateral movement over a large section of the plate boundary (~25 km segment – from Svartsengi to Kleifarvatn).

Red amplitudes represent movement towards the satellite and purple amplitudes movement away from the satellite (path is west of Iceland). The black arrows in the right corner below show the heading and look direction of the satellite. The magnitude 5.7 earthquake that occurred on the 24th of February is displayed by the red star. Here is a PDF version of the picture above.

There is no indication in this interferogram for shallow magmatic intrusions, however, the inflow of magma from depth cannot be ruled out, as this activity is part of an ongoing volcano-tectonic reactivation of the ReykjanesPeninsula.